Although somewhat of a side attraction to the world famous Ayres Rock in the Northern Territory, Kings Canyon is a worthy detour. The highlight of Watarrka National Park, found between Alice Springs and Ayers Rock, it is often included on a multiday tour of the region. 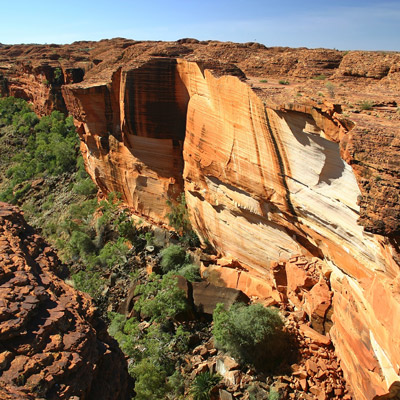 The canyon lies in the west of the sizeable George Gill Range, southwest of Alice Springs in the southwest of the Northern Territory. Kings Canyon itself, carved by Kings Creek, has 300m cliffs and several decent walks for those looking to stretch their legs. The main two are the hour-long Kings Creek Walk along the base and the four-to-five hour Rim Walk.

The Rim Walk is a must if for those who have the time. It takes in the so-called ‘Heartbreak Hill’ – a tough climb at the start – the Garden of Eden waterhole, and pretty dome-like scenery. There is also a longer walk, the 22kms Giles Track, which links Kathleen Springs with Kings Canyon.

Most people come to Kings Canyon from Alice Springs, around four or five hours away. The journey can be done on a daytrip, but it’s best to put the time aside for three-day tour which will also take in the famous Ayres Rock, three or four hours to the south.

Those who are not on daytrips usually stay at the nearby Kings Canyon Resort, just outside the park boundary. It has hotel rooms, cheaper rooms and camping available. Kings Creek Station, about 40kms to the east, also offers quad biking and camel rides.