Kata Tjuta is the companion to Uluru (or Ayers Rock) in Uluru-Kata Tjuta National Park. A collection of monoliths rather than a single entity, it resides to the west of Uluru and can be visited together with the famous attraction.

Kata Tjuta, better known as the Olgas, is about 480kms southwest of Alice Springs (by road), and 35kms from both Yulara (southwest) and Uluru (west). Although most people visit it after Ayers Rock, it can be advantageous to get it in first so you have time to enjoy the trails. 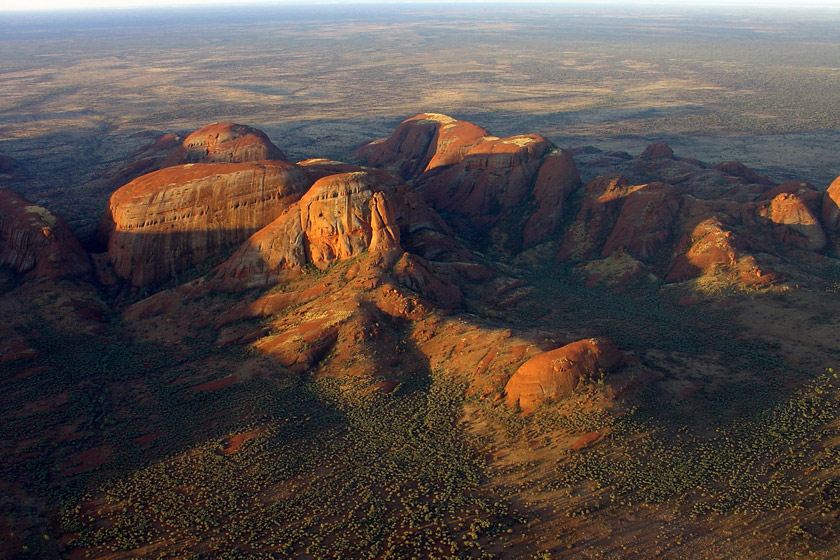 Tourists also don’t have to be as fit to take in Kata Tjuta, as it has been weathered down so much that the valleys are almost at the same level as the surrounding ground in places. Uluru will probably suffer the same fate in millions of years to come, but until then, tourists must climb 350m to the summit.

The walks , including the 2.6kms Walpa Gorge walk and the longer Valley of the Winds walk, are of medium difficulty, weaving over rocky, hilly terrain.

The Valley of the Winds walk boasts a couple of magnificent lookout points and is best started early, as it takes about three hours to complete at a medium pace. There is also the short Kata Tjuta Dune walk, which offers a view of the rocks with Uluru in the background.

For those interested in some facts, along with Uluru, Kata Tjuta is considered sacred by the Aboriginals. It is almost 200m higher than Uluru at its tallest point, atop Mount Olga. The formation in its entirety is believed to originate from one monolith, just like Uluru.