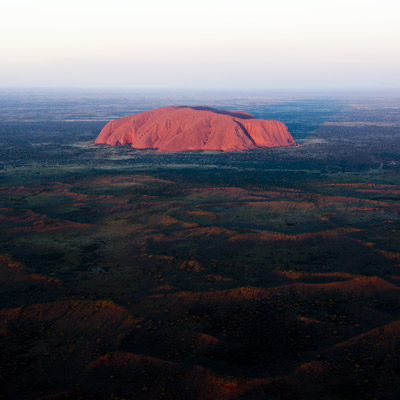 What is Uluru? Most people can recognise the iconic image of Uluru even if they don’t know exactly where or what it is. This surreal monolith of red sandstone rises abruptly out of the flat Australian desert very close to the geographical centre of the country.

Uluru, as it is known to the indigenous Aboriginal people, is a very sacred place. But visitors from around the world who come for an Ayers Rock tour have no trouble relating to the magic and power of this formation.

Uluru is easily one of Australia’s most recognisable landmarks. It rises 348 meters above the ground, but the bulk of this rock, which has a circumference of nearly 10 miles, lies underground. In geological terms, it is known as an island mountain. Such is its rarity and majesty that UNESCO has placed Uluru on its World Heritage sites list.

Hundreds of thousands of people make a tour of Ayers Rock every year to get a glimpse of this sacred rock. Uluru is famous for its ability to change colour based on the time of year and the time of day. Sunrise and sunset are particularly magical times to see Ayers Rock when it seems to glow an unearthly reddish hue.

For the local Anangu Aboriginal people, Ayers Rock is a place a great power. It is many things to the Anangu, including the centre of the universe and the home of the Earth Mother. For tens of thousands of years, the Anangu have created petroglyphs on Ayers Rock that are now considered national cultural treasures.

Many people who come to take a tour of Ayers Rock are tempted to climb the sandstone monolith. This is a point of controversy between the local Aboriginal people and the national park service that manages the entire area under Uluru-Kata Tjuta National Park. The Aboriginal people would prefer visitors to stay off their sacred site, but there are marked trails leading across and atop Ayers Rock. Visitors who aren’t deterred by the cultural warnings will get spectacular views from the top of Uluru.