Ayers Rock (now known as Uluru) is one of the most impressive landmarks in Australia. A huge chunk of sandstone and a ‘true’ monolith, it resides in Uluru-Kata Tjuta National Park.

Ayers Rock is located down towards the southwest corner of the Northern Territory and close to the geographic centre of Australia.

The rock is huge, jutting up about 350m from its barren surrounds. And more interestingly, Ayers Rock extends even further than this amount below ground. 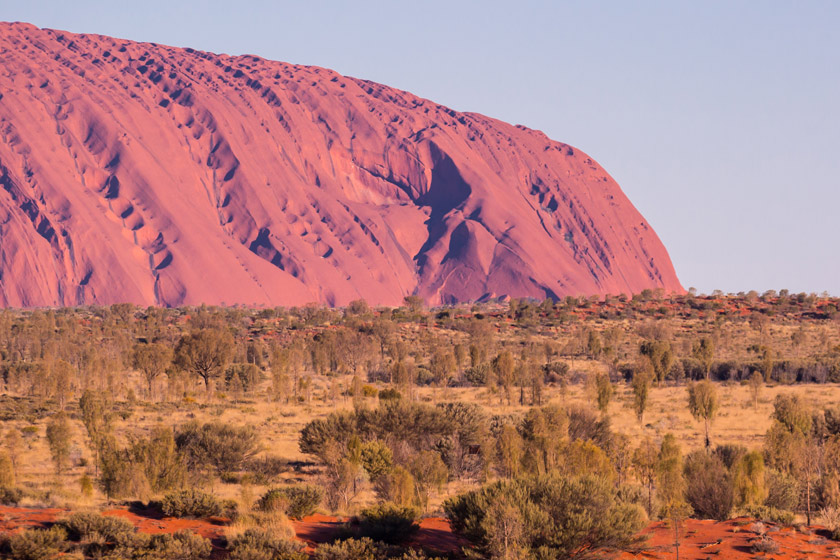 Although there are other, similar entities to Ayers Rock – most notably the nearby Olgas and Mount Augustus in Western Australia – it is the only singular monolith with its composition.

A World Heritage site, Ayers Rock also goes by the Aboriginal name of Uluru. Aboriginal tribes were living in the area 10,000 years ago. White men did not come onto the scene until the 1870s, when William Gosse named it for Henry Ayers, the then-South Australia Chief Secretary.

Uluru is about 335kms to the southwest of Alice Springs – 463kms by road, about five hours – and is served by the small resort town of Yulara.

This is where tourists stay ad most people spend the night, either in hotel accommodation or camping; there are no actual camping or other facilities within the park itself.

Visitors can no longer climb Uluru, but can continue to explore it’s base, which is around 10kms by footpath. The trip up takes a good couple of hours there and back.

It’s best to observe the rock during sunrise and sunset, when its terracotta hue morphs into a violet/blue tinge.