Travellers wishing to take in a truly unique natural sight should make a detour to the remarkable Devils Marbles, in the Northern Territory. Said to have formed over millions of years, the Karlu Karlu (the traditional name) are incredible granite boulders and rock formations strewn alongside the territory’s Stuart Highway that are perched at incredible angles and seemingly defy the laws of gravity. 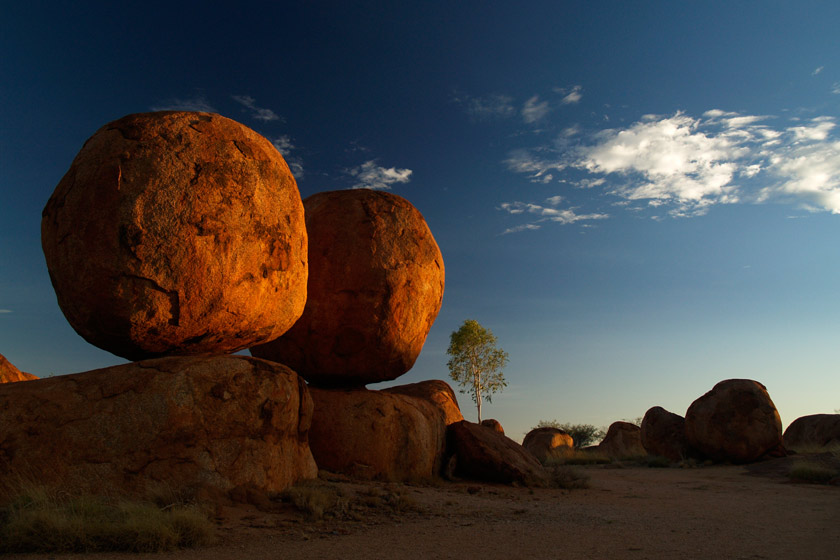 The rocks are called Karlu Karlu by Aborigines and the whole valley in which they are located – the Karlu Karlu / Devils Marbles Conservation Reserve – has been sacred since ancient times.

In fact, Karlu Karlu is the local Aboriginal term for both the rock features and the surrounding area.

It is easy to see why the valley was so important as the red-tinged formations set against skies that are perennially blue is a magical sight.

How did the Devils Marbles get their name?

The Aboriginal name for the rocks and the surrounding area, Karlu Karlu, translates to “round boulders” and refers to the large boulders found mainly in the western side of the Karlu Karlu / Devils Marbles Conservation Reserve.

The origin of the English name for the boulders is originally taken from a quote from Scottish-Australian explorer John Ross during the 1870 Australian Overland Telegraph Line expedition, when he stated: This is the Devil’s country; he’s even emptied his bag of marbles around the place!

The area was originally named Devils Marbles Reserve in October 1961 and then the name for the area was changed to Devil’s Marbles Conservation Reserve in September 1979. In 1982, almost the entire reserve was registered as a sacred site.

The significance of the Karlu Karlu/Devils Marbles valley to Aborigines was commemorated with a formal return to traditional ownership in October 2008. And in July 2011, the name Karlu Karlu / Devils Marbles Conservation Reserve was assigned to the valley.

Where are the Devils Marbles?

The Stuart Highway is a north-south trans-Australia route that runs for almost 3,000kms from Darwin (near the top of Australia) down to Port Augusta in the state of South Australia.

Karlu Karlu is in the Northern Territory along the Stuart Highway and close to the tiny township of Wauchope, located about 9 km (5.6 miles) to the south.

The reserve is about 96 km (60 miles) south of the town of Tennant Creek. The trip north from Alice Springs to Devils Marbles is about 403 km (250 miles).

Distance to the Devils Marbles/Karlu Karlu

The driving distance to Devils Marbles/Karlu Karlu is:

There are tour operators that run regular tours from Alice Springs and Darwin that include a visit to Karlu Karlu, and the reserve is a perfect day trip from Tennant Creek.

For anyone looking to visit Karlu Karlu, consider staying overnight, as you will then get to see a stunning sunset and sunrise right there at the Marbles. This is definitely an experience not to be missed.

There is a simple, budget bush campsite at Devils Marbles, Northern Territory, that makes a lovely overnight stop for tourists on overland trips. Camping at the Devils Marbles allow people to enjoy sunrises and sunsets over the land that time forgot, all in relative solitude.

Do you need to pay for a permit to visit?

The Karlu Karlu / Devils Marbles Conservation Reserve is free and you don’t need a permit to visit.

How much does it cost to camp at Devils Marbles?

Park rangers collect fees from campers for the use of the camp site at the Devils Marbles – there’s a small charge ($7.70 per family) which is payable on site (cash only).

Bookings are not required to camp, however, if you are planning on staying at the campground, try and get there early enough (before 3pm) to ensure you are not disappointed, especially in peak season.

There are 24 caravan and camper trailer sites and tent campsites at the campground, as well basic facilities such as drop toilets and fire-pits, BBQ, and picnic area.

Travellers can buy groceries, fuel and other necessities in the nearby town of Wauchope.

There’s no on-site power or water, generators aren’t allowed, and you will need to bring your own firewood if you are planning a fire. No pets are allowed, and there’s a limit of 24 hours maximum stay.

Where To Stay Longer

If you want to stay in the area for longer, The Devils Marbles Hotel has a caravan park just up the road at Wauchope. This caravan park and camping ground (formerly called the Wauchope Hotel) offers a restaurant, drinks and refreshments, comfortable cabins, swimming and a camping area.

How to get around at Karlu Karlu?

The best way to see Karlu Karlu/Devils Marbles is by foot.

There is a separate parking area which is close to the start point of the short hiking trails, which are more of a set of informal self-guided tracks.

There are several walks to enjoy, including the Nyanjiki Lookout providing a panoramic view of the Reserve.

The Karlu Karlu walk is an easy short walk (20 minute return) which commences from the car park area. The 4 km Nurrku Walk provides visitors with a longer opportunity to experience the wider Reserve.

Can I climb the Karlu Karlu?

No, the local Aboriginal community ask you to refrain from climbing on the boulders. Posters on this path explain the history of Karlu Karlu and how it was formed, and there are many stunning views to enjoy while walking around the reserve. 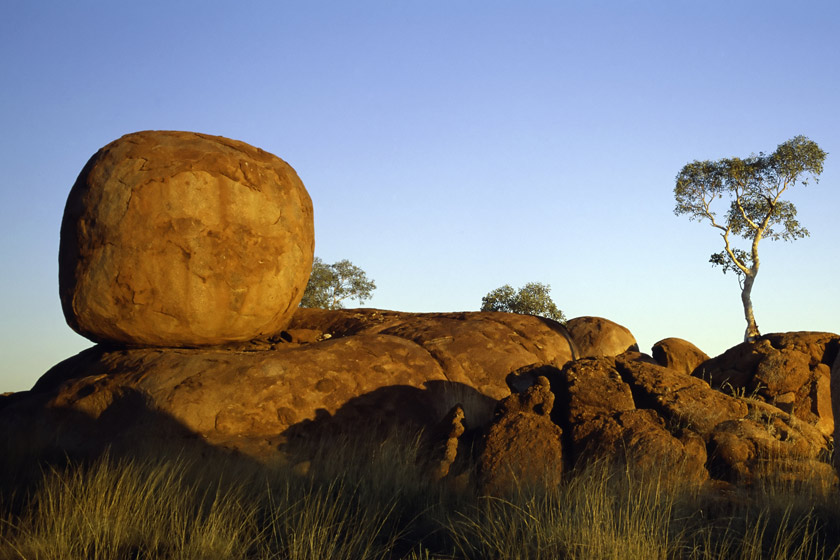 In fact, visitors to Karlu Karlu are often surprised by the wide variety of different rock formations that are there. Make sure you have enough time to explore the whole area.

Bring plenty of drinking water, a hat, sun-safe clothing and sunscreen. There’s also free wi-fi access at the site, making it easy to share your photos of this stunning destination.

There are also lots of other tracks through the valley for those spending time here to fully get to grips with the stunning boulders.

When is the best time to visit?

The fact is, the climate at Australia’s Devils Marbles is generally clear blue skies for most of the year, so you can explore the reserve at any time, regardless of the season.

Temperatures in the state can be extremely high through the summer months of October to March, seeing 40 degrees in the area. The heat and humidity can effect some people, so it is something to be aware of. The peak season to visit is in the cooler months of May to August.

The best time of day to visit is in the early morning, or later in the afternoon. You’ll get fantastic photos, as the sunrise and sunset over the rocks look amazing, all while staying cooler.

The area endures the territory’s arid climate and the only vegetation is found under boulders or in shaded nooks.