Due to the location of Alice Springs in the centre of Australia, surrounded by the remote Outback regions, taking a flight here from one of the country’s major cities is the most practical and least time-consuming way to arrive. As expected from a town which relies on tourism for its economic survival, Alice Springs flights are able to set down at the local airport just 13kms away. 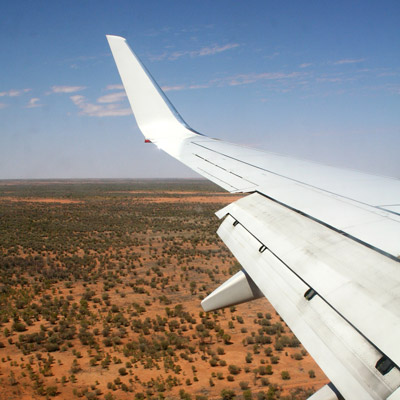 The facility serves mainly domestic scheduled flights, although the occasional international charter flight is handled, and its passenger throughput each year averages over 600,000, the vast majority of whom are tourists. Australia’s national flag carrier, Qantas, flies from Brisbane, Adelaide, Melbourne and Sydney, and Alliance Airways serve Brisbane as well as Telfer and The Granites.

Other Alice Springs flights include QantasLink, operated by Cobham Airlines, to Brisbane, Perth, Darwin and Cairns, and Tiger Airways Australia re-introduced flights from Sydney and Melbourne from April 2013. Other Alice Springs flights include QantasLink’s route to Uluru/Ayers Rock and Regional Pacific Airlines’ flight to Mount Isa. Both landmarks are favourite tourism destinations.

An important function involving Alice Springs flights to and from the airport is the famous Flying Doctor service, which uses small planes to cover all the outlying ranches and tiny towns in the region. Flying doctors travel in all weather conditions, knowing they’re the only link to a hospital service for those injured or sick enough to need the attention of these fully-trained health professionals. Charter flights for businessmen also use the facility, and hobby pilots use its general aviation services.