Uluru is one of Australia’s best-known natural landmarks. The ancient monolith is pretty impressive close up and boasts intriguing statistics, below are some answers to some of the most commonly asked questions and interesting facts about Uluru.

Uluru lies west of the Simpson Desert, not far from the ‘Red Centre’ of Australia, about 335kms southwest of Alice Springs (as the crow flies) and 463kms by road.

How Old is Uluru?

It is believed the rock was created over some 500 million years, and the Aborigines have been in the area for the last 10,000 years. To put this fact into perspective, the first mammals and the dinosaurs inhabited the Earth around 300-200 million years ago. So a fun fact for kids is that Uluru is about twice as ancient as the dinosaurs! 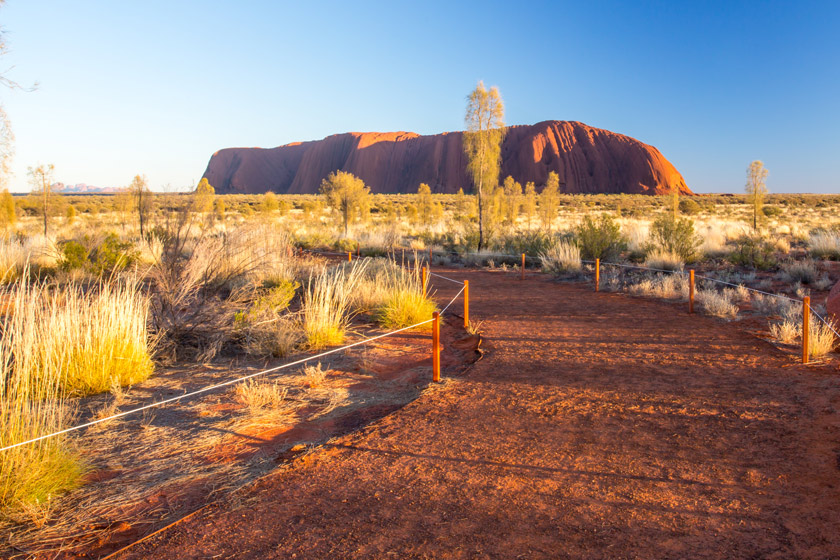 How was Uluru formed?

It originally sat at the bottom of a sea, but today stands 348m above ground. Uluru is an inselberg (which means island mountain) and there was a time when Uluru was at the bottom of the sea, but it was just the hard rock of the monolith that remained after eroding away the softer sections. But just how did Uluru form?

The formation of Uluru started around 550 million years ago, when the Petermann Ranges to the west of Uluru were substantially higher and the and and rock were eroded by rainwater and placed into fan-shaped patterns on the plains as the mountains were eroded.

The around 500 million years ago, the region was submerged under water. The fans were coated in mud and sand as it sank to the bottom and the new seafloor compressed the fans under its weight. Sanstrone rock (Uluru) was formed by one fan, whereas conglomerate rock formed the other fan (Kata Tjuta).

The oceans dried up around 400 million years ago. The earth’s tectonic plates moved, causing rocks to bend and tilt. Uluru and Kata Tjuta both move and tilted.

During the last 300 million years Uluru and Kata Tjuta were formed by softer rocks eroding away, leaving behind their stunning shapes.

How big is Uluru?

Uluru is about 3.6kms long and 1.9kms wide, with a circumference of 9.4kms. The climb to the top (which we don’t do any more) is 1.6kms, much of which is at a steep angle, while the summit is generally flat.

Ever wondered how big Uluru actually is, and what are Uluru’s dimensions?

How high is Uluru?

One of the most startling Uluru facts however, is that it is estimated some 2.5kms of its bulk is underground (no-one knows exactly how far).

Contrary to popular belief, it isn’t the biggest monolith in the world; Mount Augustus in Western Australia holds that title.

Why is Uluru special?

Uluru and the neighbouring Kata Tjuta National Park are traditionally owned by the Anangu people.

Uluru is a living and breathing landscape that is incredibly special, sacred and spiritual to the land’s indigenous owners for thousands of years. Uluru is said to have been formed in the Dreamtime, the earliest period of time.

What type of rock is Uluru?

Uluru rock is composed of arkose, a coarse grained sandstone rich in the mineral feldspar. The sandy sediment, which hardened to form this arkose, was eroded from high mountains composed largely of granite.

The local Anangu people believe Uluru to be hollow and that it contains an energy source that marks the spot where their dreamtime began. However Uluru is not hollow, it is a solid rock that extends below ground level. 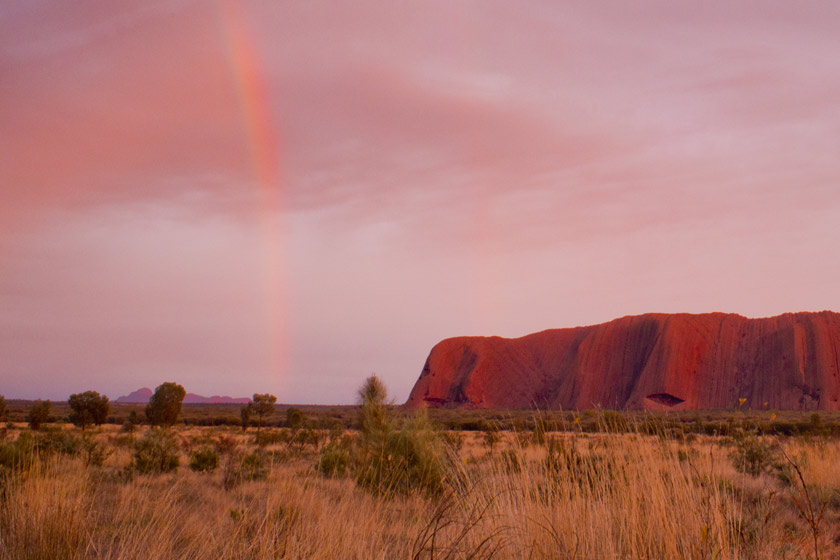 Can you climb Uluru?

No, you can no longer climb Uluru. The Uluru climb closed permanently from 26 October 2019.

Uluru’s climb chain was first placed in 1964 to keep visitors safe after visitors began ascending the monolith in the late 1930s. Uluru-Kata Tjuta National Park was returned to the Anangu in 1985 in an event known as Handback, and since late 2019, visitors have respected the local people by not climbing the ancient monolith.

Can you touch Uluru?

While Climbing Uluru has been stopped, but you can still get up up and personal with the rock on an incredible trek around the base., and yes you can touch Uluru.

The Anangu people ask that you not touch or photograph some sensitive areas on the rock, and you may learn more about these when you visit the stunning Uluru!

How long does Uluru take to walk around?

The Uluru Base Walk is a 10km walk on a flat marked dirt path, and can be completed in around 3.5 hours. Read more about the various walks around Uluru.

Why does Uluru change colour?

Uluru’s impressive colour changes are in part due to the iron minerals found in the rock itself. The iron has slowly effected the rock over the years and turned it to a bright red colour. However, movements of the sun cause the rock to appear to change colours, from red to orange to purple and back again.

What is the best time to visit Uluru?

To see the rock changing colour before you, the best time of the day to visit Uluru is around sunrise and sunset, as that’s when there is quite a broad contrast of colours, both in the sky and on the rock itself.